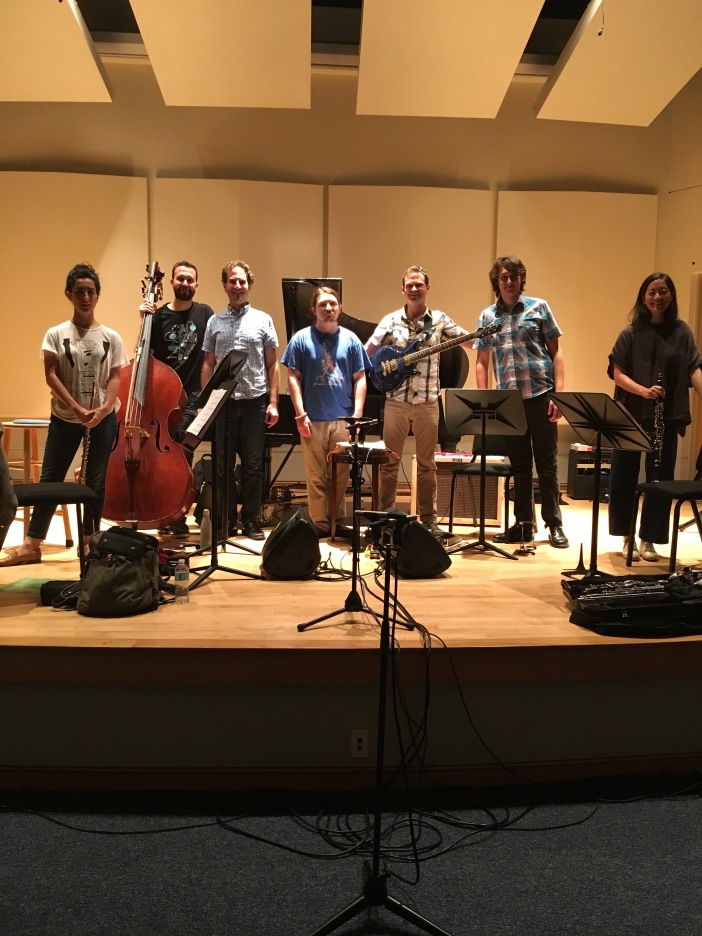 NCF composers Joshua Smith, Erich Barganier, and Jackie Christie met with NOW Ensemble this past Wednesday in Sainer Auditorium to hear their works and to give and receive feedback.

Topics covered included the ideal language of score instructions, the character of spoken parts within Jackie’s work, and the clarification of the vision of each work. We also worked on some notes and rhythms!

NOW Ensemble loves this process. In past years, NOW has worked with student composers at the University of Pittsburgh, the University of Virginia, and Princeton; this season the group will work with composers from UCLA and Denison in the Spring. NOW’s collaboration at New College, however, is special. This is the third time NOW has visited NCF.

Josh, Erich, and Jackie will rehearse with NOW again on Friday afternoon. They’ll also talk a bit about their pieces during the concert. Susanna Payne-Passmore is unable to attend the concert, as she is pursuing a Masters Degree at the University or Oregon and her schedule is full this week. Progress is underway on her piece as well!

We can’t wait to see you at the concert!

What does a contemporary score for an instrumentation like NOW Ensemble’s (flute, clarinet, electric guitar, piano, bass) look like? What are the stories behind the four world premiere pieces at this concert? How did each composer approach writing for this group of instruments? What can you expect at the concert?

We don’t want to give it ALL away, but, here is a note from each NCF composer about their work, and a view into their scores.

It’s hot in Metis this afternoon.  Whorls of dust from the outback meander onto pavement and are slowly dispersed in red across the blistering tarmac.  The sky is an orange purple hue, lit by this system’s red dwarf star.  On any other day, in this trade-port on the colonial world of Minerva, off-world trade ships would undergo final procedures for the day, returning at dawn for the next round of resource auctions.  Usually, routine systematic trade would be handled by the planet’s A.I.- controlled economic network, but on this day, we became acquainted with someone new. 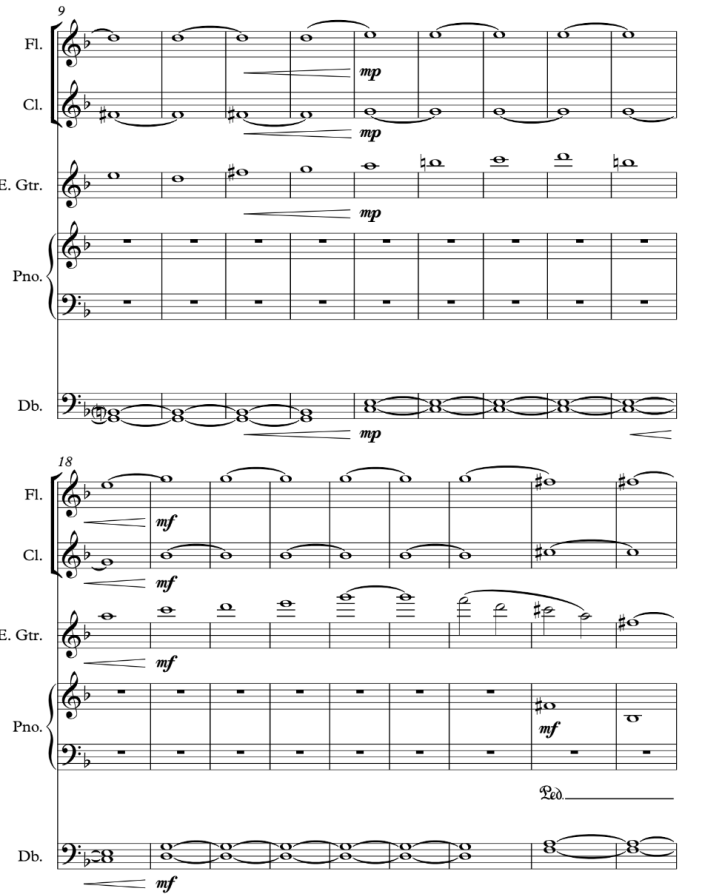 I was born in graduate student housing in the Breckenridge apartments of Austin, Texas, along the shores of Lake Austin.  At that time, my father was a student taking classes at the University of Texas pursuing a doctorate in music.  We lived in a small apartment for the first four years of my life. Much of this period was dedicated to catching insects and playing Nintendo.  After Austin, my family would move every couple of years or so.  In all we lived in South Texas; Rome, Georgia; a terribly boring suburb of Houston, Texas; and finally, South Florida.  It was in Georgia at the age of 11 where I began an interest in guitar.  I was homeschooled in all grades beyond the fourth. Throughout my time moving around, thanks to either the internet, friends, or family, I would be exposed to different forms of music, notably 90’s Hip-Hop from my brother, and Jazz/Fusion from my father.  Before transferring to NCF, I earned the Associate of Arts degree from Edison State College, where I received a Fine Arts scholarship in music and was also awarded the Newton Student Chair in Humanities scholarship.  Here at New, I am pursuing my Bachelor’s degree in Music.  I am interested in music composition for film, and hope to compose for visual media after graduation.

This piece began as a jam I’d play at the piano whenever I was feeling stressed about social or political issues. With the intensifying election cycle and hyper­partisan legislation this year, those feelings of anxiety and frustration were impossible to ignore.

The first half of the piece composed itself, more or less, in a very tonal idiom, using only major and minor modes, as popular music and older classical styles use. But over time, I’ve become more critical of these modes, particularly the binary opposition between the two and the tonal hierarchy on which they are both based. Hierarchies and binaries are things I prefer to dismantle rather than perpetuate. After reflecting on what I had composed, I realized this piece could represent the feelings of those I most vehemently disagreed with just as well as they could reflect my own! Because of the nature of musical meaning, it could be used to rally any group or protest any issue equally well. Therefore, the music did not reflect my ideas so much as my state of mind, one shared by people of diverse viewpoints feeling frustration, alienation, and anxiety about the future of the nation.

So I decided to dismantle the tonal hierarchy and bypass the binary opposition. The sound I discovered gave me the solution I had been seeking all along. In the middle of the piece, you might notice a moment of emotional catharsis as the music finally reaches a major cadence. But it’s a catharsis that doesn’t move us forward, only back to where we started. The different sound that comes out of this lets go of the obsessive kind of engagement that characterizes politics today by embracing complexity and ambiguity. On a technical level, the new sound has more pitches per octave (complexity) and no tonal center (ambiguity). On an experiential level, the piece requires the listener to move outside of what is easy to understand and to instead accept dissonance and embrace the unknown. That is the solution I bring to you.

Susanna Payne­Passmore is a composer living and working in Eugene, OR where she is working on a Masters in Music Composition at the University of Oregon. In composition, Susanna seeks to inspire her audience with unusual sonorities, to challenge them with experimental tonalities, and to awaken each listener to the unexamined subjective depths that wait within. Recent explorations include: nonatonic scales, bitonality, extended techniques, a “piano clef” system of notation for work involving the inside of the piano, and multi­octave scales. After graduating the New College of Florida in 2012, Susanna embarked on a Fulbright to the Republic of Georgia to teach English and study one of the oldest known traditions of vocal polyphony. In her natural habitat, Susanna can be found sipping tea, devouring books, playing with cats, and developing stories for graphic novels. You can contact her at susanna.paynepassmore@gmail.com or on Facebook at facebook.com/susanna.paynepassmore.

“Were You the Sea and I, Yume”

“Yume” is the romanization of 夢, the Japanese word for “dream, visionary, wishful”; the sea is an established image of mobility; “were” indicates ideal conditions not presently met. This piece is about the creative process and struggling to translate an artistic vision.

…the piece ends with a “chaotic section”…

On the Chaotic Section

This section aims ultimately to wind up in a furious mess of “noise” – that is, sounds the average listener would find somewhat unpleasant. Each player’s written part ends at a different point, and the tempi at which each player takes their respective line need not match everyone else’s after ten or so measures. You may play the notes any way you like as long as they are loud (do not drop below forte). When you reach the end of your part, you are literally ad libitum until the end of the piece—a certain amount of time, say 20 seconds, after the last written note has been played, or on a cue if preferred. If you have some frustration to get out instrumentally, here’s your place. If you would prefer to vent about something vocally instead, have at it. If you feel obliged to do a bit of both and add some interpretive dance for good measure, better still.

Program Notes – I began writing the material that would later turn into Gökotta in March 2016. I had been studying Nordic fiddle performance and was writing a violin solo for a competition that would incorporate a variety of instrumental techniques from Scandinavia. I deeply enjoyed the material I had composed, but it was not suited for a classical violin solo piece. I set it aside with the intention of developing the composition when a key opportunity presented itself. As soon as NOW Ensemble approached me, I had an idea of where I would begin.

Soon after beginning work on the piece, I ran across a word that would summarize the nature of what I intended to capture in the composition. Gökotta is a Swedish verb, meaning “to wake up early in the morning with the intent of watching the sunrise and listening to birds”. This unique word inspired many of the textures and stylistic elements throughout the work and acted as inspiration when I ran into writer’s block. For me, it was a perfect summation of the Scandinavian roots of the piece and could invoke the mental image I wanted to convey in the listener as they experience the composition. 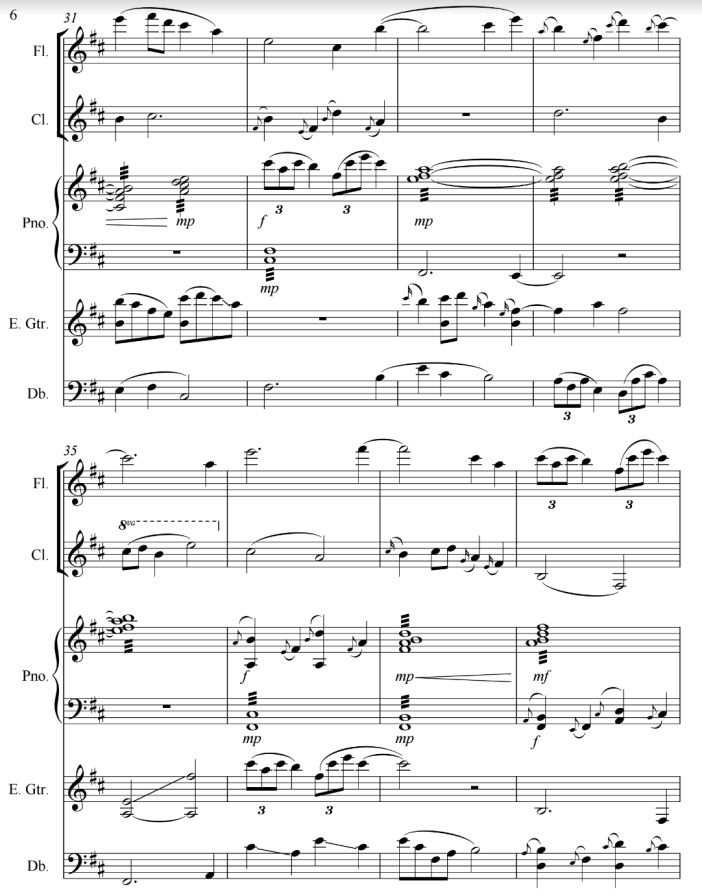 Biography – Erich Barganier is a composer and multi-instrumentalist hailing from St. Petersburg, Florida and studied composition and theory under Mark Dancigers and Bret Aarden while attending New College of Florida. Upon graduating, he was awarded a Fulbright Scholarship and taught English at Belarus State University of Culture and Arts in Minsk while collecting regional folk songs for a folklore project. His compositions have been performed live or in installations in locales as diverse as New York City, London, Minsk, Sydney, and Kuala Lumpur and have been recorded on Nebularosa Records. Currently, Erich works as a music instructor, freelance sound designer and as an in-house composer for an industrial design firm.

Since 2004, NOW Ensemble has worked as a collective of performers and musicians, commissioning, performing, and recording music for the unique instrumentation of flute, clarinet, electric guitar, piano, and double bass. NOW Ensemble has worked to create a paradigm where continuous collaboration, experimentation, and openness to diverse musical influences is taken as a given.

“NOW and NEW” is a special concert in part because it has given NOW Ensemble the opportunity to deepen our relationship with two alums who first heard NOW Ensemble on a New Music New College concert in 2010. Susanna Payne-Passmore, ’12, and Erich Barganier, ’14, went on to create their own composer-performer collective after hearing the concert, naming it The NEW Ensemble. Both Susanna and Erich composed new pieces for NOW for this concert, writing for the group for the first time.

NOW Ensemble will also perform music by current students Jackie Christie and Joshua Smith. Both Jackie and Joshua took composition projects from Music courses and developed them into new chamber works for the quintet.

NOW will round out the program with music by Mark Dancigers, Visiting Assistant Professor at New College and a NOW founding composer and guitarist, as well as a piece by Russian-born composer Yevgeniy Sharlat, now a Professor at the University of Texas at Austin, which features the ensemble playing along with custom-designed music boxes.

This is a text widget, which allows you to add text or HTML to your sidebar. You can use them to display text, links, images, HTML, or a combination of these. Edit them in the Widget section of the Customizer.